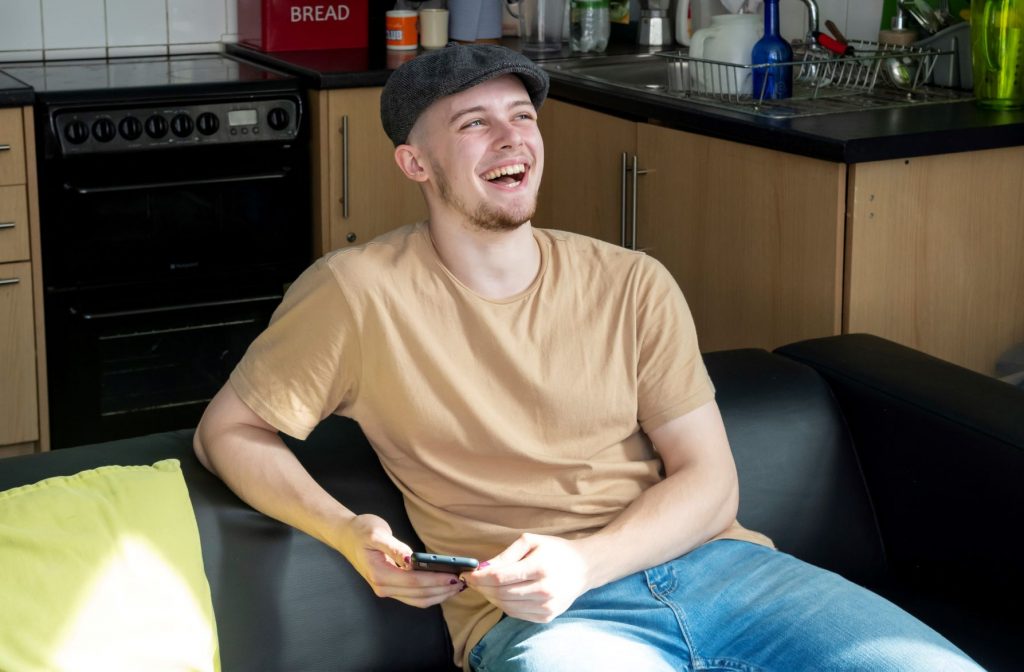 Jack came out as gay when he was 15. His family struggled to accept it and it caused tension and arguments at home. The situation came to a head when Jack was 16. After a huge row his Dad threw him out.  After a period sofa surfing, Jack eventually found himself on a park bench and realised he had to get help. He went to YMCA Youth Advice Centre who were able to refer him into our 24-hour supported accommodation. As well as getting help with his mental health, he’s been encouraged to join LGBTQU+ support groups and is thriving in his new home.

When I told my family I was gay it was probably the worst day of my life. My dad just couldn’t look at me and my mum wouldn’t stop crying.  It made me feel terrible about myself –  I got so depressed and low.

That’s when I started cutting myself – it just became something I did without really thinking about it.

Things got worse when I was 16 and started going out – because I just hated being at home. My dad would get really angry, wanting to know where I’d been. After one terrible argument he just screamed at me to leave. I stayed on different friend’s sofas or floors for a while, but I just sort of ran out of places to stay. That’s when I ended up sleeping on a park bench – it was so scary – that was the worst time.

Being given a home at YMCA was the best thing that could have happened to me. It was such a relief to have a roof over my head and feel like I had a place to belong.

I was in a really bad place mentally – I think I just hated myself back then. The support workers were amazing and they just seemed to ‘get me’ and know what I needed. They encouraged me to join a local LBGTQ group and that was the start of me accepting myself for who I am. I feel so different now, I’ve mostly stopped self-harming and if I’m feeling low I know I’ve got people to talk to. I’m starting an apprenticeship soon and I feel so much more positive about the future.

Name and image have been changed to protect the identity of the young person.

Leaha, a resident in supported accomodation, couldn’t afford to buy football boots. But, thanks to generous donations from our supporters, she was able to take part in an international football competition.

Ali left Iran aged 15 because his life was threatened. Read how living with YMCA DownsLink Group YMCA helped him to adjust to a new life in the UK, and how his future is looking positive.

After years of struggling with poor mental health, Kai moved into our 24-hour supported accomodation and finally began to get the help he needed.
Read all our stories