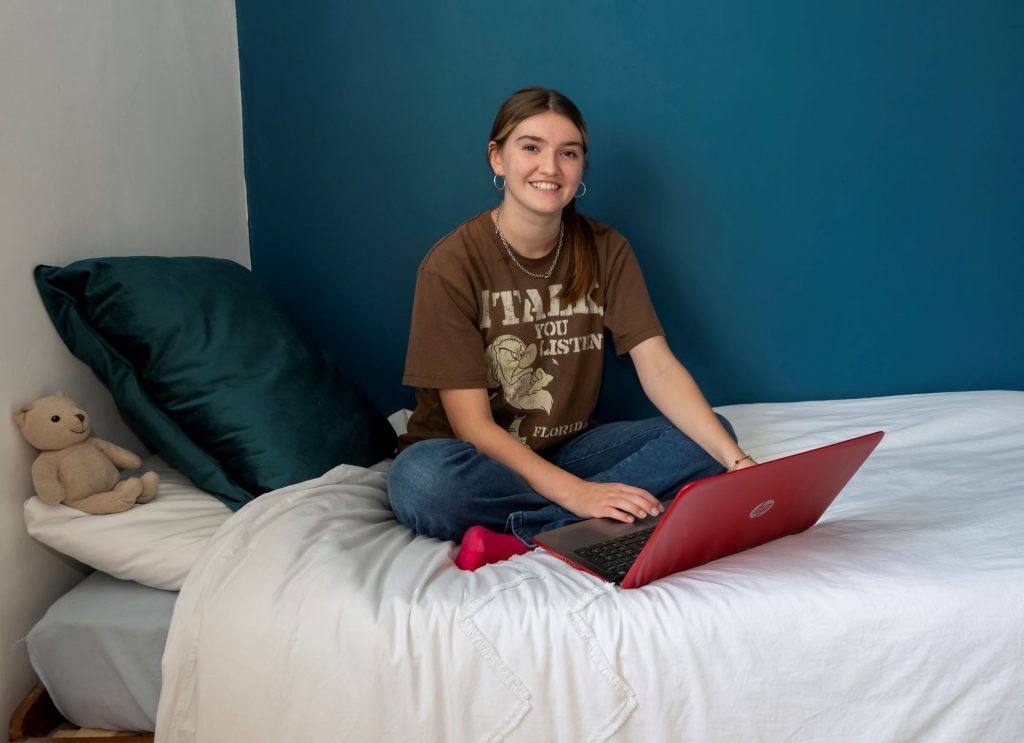 Becky is 19 and left home after her Dad’s drinking became too much for her to cope with. Her mum died when she was 10 and her Dad turned to alcohol to deal with his grief. She moved in with her boyfriend at 17 as a way to get away from her Dad, but when that didn’t work out she found herself facing homelessness. She was given a home with YMCA DownsLink Group in 24-hour supported accomodation and with the help of her project support worker she has gone back to college to study music and is slowly rebuilding her relationship with her Dad.

It’s weird but I never thought of myself as homeless – that’s something that happens to other people –  older people sitting in doorways –  not someone like me.

Before my mum died I think I had a really normal life, you know, just normal stuff – school, friends, all that. But then it was just me and my Dad and everything changed. It was all right at primary school but everything seemed to go wrong when I started secondary school. I found it harder to make friends and I got really badly bullied – I never had the right stuff – people would call me skank cos my uniform was always a mess – I got bad acne and was really skinny. I felt like I didn’t fit in.  My dad was hardly ever at home and when he was I didn’t really talk to him as I just seemed to make him angry. It was even worse if he’d been drinking – which was most of the time – and I sort of kept out of sight as much as possible. I started to feel like I was invisible.

When I was 17 I got a boyfriend. I thought he was so nice – he would buy me things and look after me. I didn’t plan it but one day my dad was shouting at me so I just packed my stuff and went to live with him.  But, he wasn’t nice to me anymore and he said he didn’t want me there. So suddenly I had nowhere to go – no where to sleep.  I went to my nan’s for a bit, but we’re not that close. She let me sleep on the sofa for a few weeks but my grandad’s got dementia and they live in a one bed flat so I couldn’t stay there.  I really didn’t know what to do and that’s when it hit me that I was actually homeless. I felt so hopeless and like there wasn’t anyone in the world who cared about me. I missed my mum.

Coming to live at YMCA has been amazing. I’ll be honest, I thought it would be horrible – like some dingy hostel full of scary people. but it’s not like that at all. The staff are so nice, they really care about you and they make you feel like you’ve got a real home.

My support worker is great and she’s always there if I need someone to talk to. I’m back in college now and doing music which I love. I feel like I’ve got a future now and things are even getting a bit better with my Dad.

Name and image have been changed to protect the identity of the young person.

Ali left Iran aged 15 because his life was threatened. Read how living with YMCA DownsLink Group YMCA helped him to adjust to a new life in the UK, and how his future is looking positive.

Nathan was struggling with his family relationships and mental health after coming out to his family at 15. Our Youth Advice Service found him specialist help.

After years of struggling with poor mental health, Kai moved into our 24-hour supported accomodation and finally began to get the help he needed.
Read all our stories