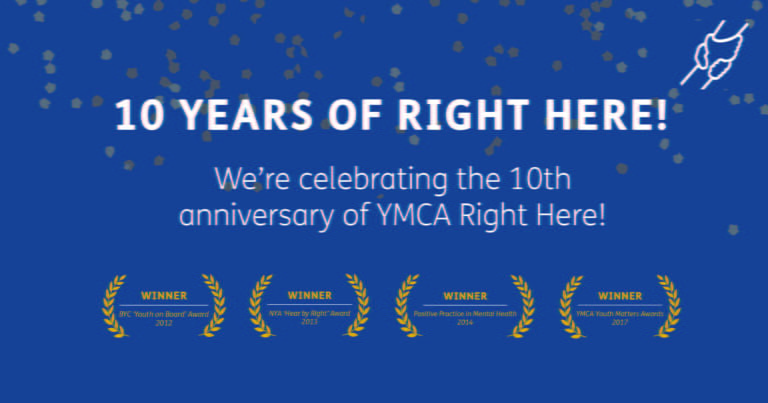 The award-winning youth involvement & influencing project, YMCA Right Here, delivered by YMCA DownsLink Group, was officially launched 10 years ago this week. Over the last decade Right Here has been responsible for delivering some of the most innovative youth-led health promotion initiatives and campaigns, including #IAMWHOLE – a campaign to reduce stigma and normalise conversations around mental health.

#IAMWHOLE was originally developed as a local Brighton & Hove campaign, in partnership with the NHS and fronted by Jordan Stephens from the Rizzle Kicks. However, through involving the YMCA federation across England & Wales, we launched #IAMWHOLE as a national YMCA and NHS campaign on World Mental Health Day 2016. What no one could have predicted was that within 24 hours we would reach over 121 million people across the world and deliver the YMCAs first global campaign, some achievement for YMCA DownsLink Group and for Right Here!

One memory that’s stayed in my mind was a young man, who two days later saw and recognised a campaign banner hanging outside our Youth Advice Centre in Brighton, which gave him the confidence to walk through our doors and finally ask for help with his mental health.

‘I‘ve been thinking about how brokenness is part of being made whole. That the lowest of lows become the greatest opportunities for healing when properly supported #IAMWHOLE’
(a young person’s post on social media)

Youth volunteers have been at the heart of Right Here since its inception in 2010, as one of four pilot projects through the Right Here national initiative developed and funded by the Paul Hamlyn Foundation… and so began the journey we continue on today of youth Involvement and Influencing, with Right Here young volunteers co-planning, designing, and delivering a range of health promotion work.

‘It was great to see that our research had hit a nerve and people my age were willing to share personal experiences and suggest improvements; from one focus group alone it was clear that the clinical services provided in Brighton and Hove for Young People was a talking topic and that young people want there to be change and actively involved in bringing about this change’
(Right Here youth volunteer)

This inspired the youth volunteers on a journey of GP engagement work (which continues today), to influence GPs to improve their responses and interactions with young people; culminating in them speaking at a national conference for the Royal College of General Practitioners, and devising and delivering training to GP Registrars as a formal element of their assessed training programme through the Kent, Surrey & Sussex Deanery – which was truly ground-breaking.

‘Invaluable – really useful for our exams and actual daily practice’

‘Much more confident in approaching young people and especially talking about substance misuse/mental health/attitudes. Thank you!’
(feedback from 2 of the GP registrars trained by Right Here youth volunteers)

The project has been blessed with talented and creative staff and project managers, all with a passion for empowering, developing and nurturing young peoples’ involvement and leadership in the project; and for promoting health and wellbeing amongst children and young people.

I have lost count of the number of amazing Right Here youth volunteers who’ve been involved over the past ten years, but it literally is in the hundreds. The common thread that runs between them is that Right Here has provided a safe environment to develop self-belief, skills, and confidence; to provide them a platform to have a voice; to better understand their own mental health challenges; to form unlikely and lasting friendships; and to find a place where they have a strong sense of ownership, of belonging, of value, and in their words ‘a YMCA  family’.

‘Right Here has given me a sense of belonging. It feels amazing to be a part of something I’m so proud of’

‘Our meetings are a safe place where I don’t feel judged. I can share my experiences with other members who have gone through similar things’
(Right Here youth volunteers)

To celebrate our 10 year anniversary, we will be hearing from some of the Right Here volunteers over the course of the week, from the past and present, and showcasing some more of their incredible achievements through our communications channels. Our specially designed timeline also captures some of our monumental milestones over the years.

Not only have we inspired so many young people, but they have inspired us as a charity and helped us realise and value the importance of youth voice, and welcoming and supporting any and all young people to be able to influence the YMCA (our operations, our strategy, our vision) and to effect change in their lives, their communities and the world around them.

I’m excited for the next ten years as we develop further our ambitions around Youth Involvement & Influencing within YMCA DownsLink Group, ensuring children and young people’s voices are central to everything we do.