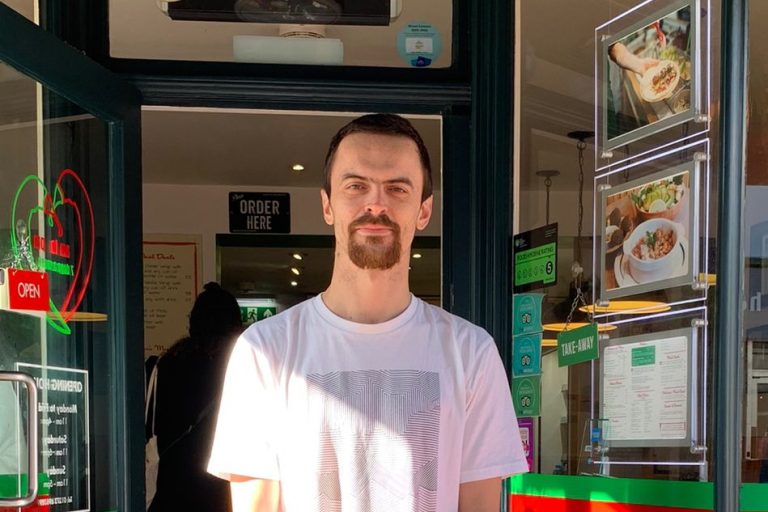 Ben had a difficult time growing up and was thrown out of home at just 15. He ended up in a hostel with adults which impacted his mental health. Through the perseverance of a teacher, Ben was given a home in our 24-hour supported accommodation and life got better.

We caught up with him at the Filfil café in Brighton, where he now works as a chef, to find out how he turned his life around and the part that YMCA DownsLink Group played in getting him there.

Ben tells us his story, in his own words:

I had such a difficult childhood and became a bit of a problem child, but it wasn’t really my fault. I had years of being abused as a kid. When I went to high school, I was a bit all over the place, getting excluded from school and being in trouble a lot. My mum couldn’t deal with that, so she kicked me out when I was 15. At that age, because I was male and mid-teens, I wasn’t seen as a priority, so they stuck me in adult accommodation and it was horrible, with walls crumbing around me and people screaming every day. It was such a scary place to be.

I luckily had 2 school teachers who rang up every day and said; “he can’t stay here, it’s horrible”. One teacher would come and pick me up from the hostel and take me to school each day. I’m so fortunate that my teachers kept going and I got moved into 24-hour accommodation with YMCA DownsLink Group.

I was in such a dark place. I spent so many years wanting to kill myself, I couldn’t see happiness and thought there was no hope. But then the lovely people at YMCA gave me a nice home to live in and a safe space.

They (YMCA project workers) met with me a few times a week and would sit down with me, talk to me, and teach me. At the time I don’t think I really appreciated how good it was, I must have been horrible back then. But looking back, I realise how important it was. Those people are saints, they have to deal with all different people each with their own problems, stories etc.

I think if anyone who is living with YMCA could look past the dark moment they’re in and see that there is hope and there is a chance for people to live a normal life. I never would have believed it back then if I was told that I could have got a job, live independently and have a good life. It’s all thanks to a couple of teachers and the people at YMCA who never gave up.

There were many times when I was living at YMCA that I probably should have been kicked out as I was raucous and misbehaving. I didn’t really realise while I was living there that they didn’t give up on me, they gave me a chance. 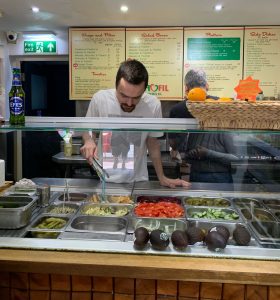 At YMCA I could go downstairs in my slippers and sit with people who were going through similar things to me. Without this, I would have been sat in my room alone and wouldn’t go out or want to be near people. My first experience of cooking, cleaning dishes and hoovering was with YMCA, and we had room checks to make us look after our rooms. All these little things that at the time I didn’t realise were building me up, my confidence and life skills. And the staff in that office were angels, they stick with you and cater to everyone’s needs. There was always somewhere there.

I was very fortunate that they looked after me and I got a job when I was 16 as a kitchen porter in a hotel. It was incredible. I then moved on to cheffing for 4 years in that hotel while living at YMCA. It was nice to have the roots and the structure given to me so that I could do that.

I left YMCA to go to France and worked ski seasons – I did that for 7 years and it was incredible. I don’t think I would have ever been able to even consider going to work in France if it wasn’t for that time at the YMCA. In between ski seasons I was coming back to Brighton and doing 15-hour shifts. When I started in the industry, I was finishing at 1am, walking home crying, wondering why I was doing these long shifts into the night, but I stuck with it, kept going, and it’s turned out really well in the end. It was brutal but I learnt to organise myself.

I also did a qualification and am a qualified chef. I spent nearly 15 years of being in the hospitality industry and working like a dog and now I’m living the good life with a proper 9-5, living in a flat with my lovely boyfriend and having a good life.

What would I say to someone in that situation? 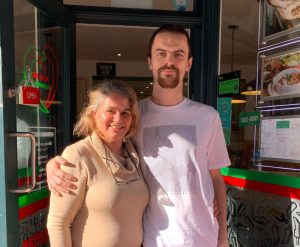 Don’t give up, keep trying, keep going, everything gets better in time. You might not see it now, you might not see the light at the end of the tunnel but with people like YMCA, you’ll gain the tools you need over time. Be easy on yourself. I used to beat myself up, blame myself for things that were out of my control. Every day you get through is a success story. Make it through. Wake up each morning and think ‘I can do this’.

My final message of hope is that I was as messed up as you guys were, if not more. But the days get less difficult to deal with. What helped me was breaking it down into small achievable goals. For example, today I’ll make my bed and brush my teeth – if I do that then I’ve won, no matter what else happens today. Don’t think, ‘oh I need to get myself a flat, get a job, stop feeling this pain’ – this won’t happen in a day. But, if you set yourself a goal that you can achieve then you can pat yourself on the back when you’ve done it and then the next day you can think, I did that yesterday, so today I can try something else.