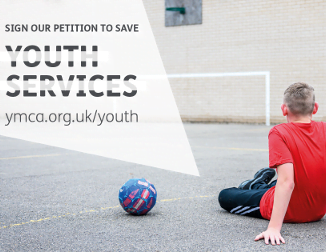 Areas with planned spending cuts of 80% or more extend throughout England, from 86% in Liverpool, to 94% in Southampton and 96% in Gateshead, where funding will have fallen from £6,958,000 in 2010/11 to a predicted £277,000 in 2019/20. And if these figures weren’t alarming enough, 8% of local authorities revealed their planned cuts for the current year would mean a 90% reduction in spending on youth services, rendering funding comparatively non-existent.

Denise Hatton, Chief Executive of YMCA England & Wales, said: “Youth services offer a vital lifeline within local communities, providing young people with support, advice and a place to go when they need it most. The year-on-year cuts to youth services are not without consequences and we are already seeing the impact of these cuts in communities across the country.”

The day-to-day impact of youth services often goes unnoticed by the public, but its benefits cannot be underestimated. Alan Maphosa was referred to YMCA Hayes at the age of 21 after arriving as a refugee from South Africa 10 years ago. Through his use of, and dedication to youth services, Alan has gone from a homeless young person accessing supported housing with YMCA to a qualified youth worker in just 18 months. An established boxing tutor and football coach, Alan is well known in his West London community and has been integral in engaging with young people who are involved in local gang culture. He works with the police to achieve many positive outcomes for these young men, who would otherwise have nowhere to turn. As part of youth services, there are almost 8,000 participants involved in crime prevention and avoidance programmes run by YMCA.

On the back of these devastating funding cuts, YMCA is asking the public to show their support in making young people the central focus of government action. Dedicated and appropriate funding would allow local authorities to deliver necessary youth services locally and support their communities. Together, we can ensure that the services which provide a sense of belonging and keep young people safe are there when they need them the most.

YMCA would like the public to show their commitment by signing this petition and raising the issue of cuts to youth services with their local MP.