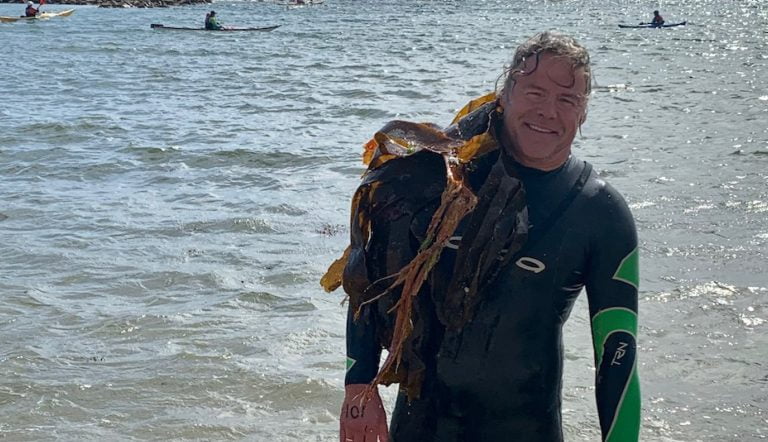 We are very happy to report that despite challenging weather conditions our supporter Kelvin Pryer has completed the Scilly Swim challenge raising an astounding £7,927 (and counting) for our work. This incredible challenge pushed Kelvin to his limits as he battled 30+mph winds, large waves and cross tidal currents to complete a total of 17km of swimming.

Below Kelvin shares more about his epic Isles of Scilly swimming adventure.

Well, Mother Nature decided to give us a good lesson in respecting the sea and the weather, by parking Hurricane Danielle 100km off the Isles of Scilly last week. The Dart10km and the Windermere ChillSwim were both cancelled on the weekend of 3rd and 4th September and so I was expecting the same for our Scilly Swim scheduled for Tuesday 6th September, especially given the weather forecast!

The crossings from one island to another were just too treacherous, with 10ft swells and Beaufort Scale 8 gales blowing. At an event a couple of days before, 20 swimmers had to be pulled from the water and the safety kayakers were constantly capsizing! Despite this the Scilly Swim organisers decided to press ahead, albeit with their Plan B – 11km of inshore sea swimming around the main island of St Mary’s. These are my kind of guys and girls!

On the morning of the swim challenge, everyone was feeling a little deflated that we wouldn’t be doing the planned swim around the islands, but we soon forgot that as we stood on the shore getting ready for our first swim in 30+mph winds and watching the large waves crashing against the rocks at the mouth of the bay.

Even swimming in the bays was very exciting at times with some decent swell and the crosswind to contend with. The third swim was the most challenging – it was a 2.4km swim out and around a small headland and then around an islet which was only a couple of hundred metres off shore, but with a 6ft swell and waves coming at you from all directions, it was not for the faint hearted. I loved it!

We were all pretty tired after the first three swims, not realising that they were saving the longest swim til the end. A 4km swim off the North coast of St Mary’s in pretty terrible weather (for the spectators – Sorry Sarah!).

At the end of the swim, we all certainly felt that we had completed an endurance race as we wearily hiked the 3km back to Hugh Town, chafing in all sorts of places! My No1 supporter, Sarah & I stayed on St Mary’s island for the remainder of the week and on Wednesday caught a boat out to St Martin’s island and found a stunning beach on the leeward side of the island. Crystal clear water shared only with a local seal, some starfish and some large shoals of fish swimming among the enormous kelp.

On Thursday, with the weather improving and some careful planning, I decided to take matters into my own hands. We got a boat out to Bryher island I swam the 1.6km over to Tresco island and back, this time without my wetsuit. The 1.5kmph cross tidal current made for a challenging but manageable swim. Bouyed with the confidence of Thursday’s swim, on Friday we headed to Tresco and I swam across to St Martin’s, again without my wetsuit.

On the 1.5km outward swim it was low tide and waist deep water for most of the way with a slight current giving me a bit of assistance. This was really enjoyable until about halfway across when I realised I would have to swim back! The return swim to Tresco was directly into a 1.5kmph tidal current in about 2m deep of water that was rapidly rising on the incoming tide. This made the return leg equivalent to a 2.5km swim. This was far and away the most memorable swim as I was constantly having to recalculate routes and escape plans. It took my total for the week to 17km and left me with a real desire to return and complete the other island crossings. Whilst it wasn’t quite the swim that I had intended, it was nonetheless an epic challenge for the different reasons described above.

Thanks again for everyone who has supported me in raising over £8,000 (including GiftAid) for YMCA DownsLink Group. This is an epic amount and I keep getting lovely emails from YMCA thanking you all for your sponsorship. This is unfinished business and I’ll definitely be returning to tick off the remaining crossings.

We are so thankful to Kelvin for his desire to raise funds for us through this extraordinary challenge. His dedication to training and positive attitude throughout is what makes him so inspiring.

Kelvin has smashed his fundraising target of £6,000 but you can still support him, so please donate what you can. Visit his Just Giving page here.

If, like Kelvin, you have a challenge you are planning and would like to support us – please make contact so we can help you as needed, email [email protected] or see our website for more details.