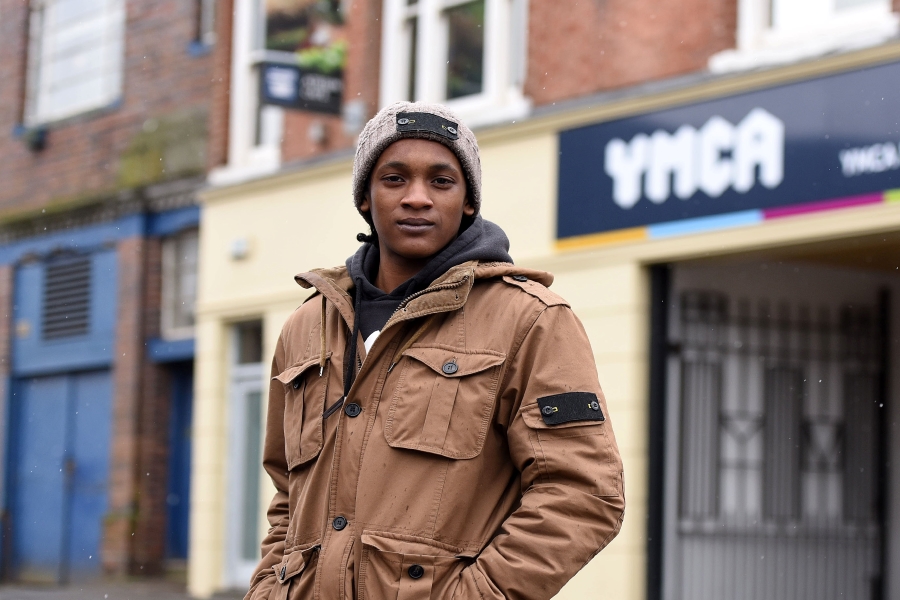 Ali was 14 years old and living in Iran when he converted from Islam to Christianity.  However he was faced with persecution and death threats so to save his life, at 15 he fled the country.  His mother paid a smuggler to assist him.

The year long journey from Iran to the UK was fraught with danger; he crossed the border into Turkey on horseback under fire from border police; he crossed over to Greece in an overcrowded dinghy, endured life threatening journeys in lorries (one among frozen fruit, another in an air tight compartment) only to be held captive in France for ten months, before the last leg of his journey, unable to pay smugglers or contact his family.

Eventually, while hiding in a lorry travelling through Surrey, the local police discovered him.  Because of his age, 16 by this time, he was eventually sent to a YMCA DLG hostel that is home to several other young unaccompanied asylum seekers.  Ali takes up the story.

“Travelling alone from Iran, I felt like a homeless person.  I no longer had my mother or father.  I was held in a house for many months and I was not allowed to go outside.  I had to stay in a room with the smugglers.  I knew I couldn’t go back to Iran as it isn’t safe for me, and I even tried to commit suicide.

When I got to the UK the police found me.  I needed a safe place to stay. I needed someone to support me so I was sent here to the YMCA.

I have had a lot of support here.  It has helped me to organise my life.  The YMCA has taught me how to find friends, I feel safe here and I am going to college.  I have learned English here very well in the last seven months. My support worker has taught me about everything, how to spend my money, how to meet people, how to do a lot of things.  The other residents have helped me to learn how to live in the UK.  The staff are so friendly and kind and they have good conversations with me. They have all taught me a lot, especially the lady who cleans my floor in the hostel – she has helped me to learn the names of foods and other things.

Everything has changed.  Now I have the opportunity to do everything.  I have a lot of hope and I feel more normal, I am connected to the community.  Before I was so shy, now I start conversations with people because I have a lot of confidence.  Now it’s incredible I am doing A levels which are the most difficult A levels in the UK – Biology, Chemistry and Maths!

I hope I will be able to train to be a doctor.  This means I will make good money.  I have a plan to go to other countries, poorer countries, for one month a year to provide medical help for the people.  I want to give back help to people in bad situations.

Before I came here I found God, I found Jesus.  When I got here I went to a local church and the people there have become my family.  The huge thing I have learnt here is to respect everyone no matter what their religion or country is.  I have learnt this in England.”

Ali’s YMCA support worker says, “When Ali arrived he was extremely chaotic and clearly traumatised.  He had no point of stability in his life and he was putting himself in very dangerous situations, and approaching life in a confused way.  Now his life has totally changed.  He is stable, working hard to understand and take control of his future.  He has proactively found friends who have helped him feel normal and connected, confident and safe.  The local church has become an incredible family to him.   Ali’s life has been transformed and he is heading towards a bright future in which he will accomplish much.”

Ali concludes, “In the YMCA I have learnt everything to help me in my life in the future.  When I came here I couldn’t connect with people. I have learnt so much English and learnt UK customs from the people I’ve met.  Being around people has really built my confidence.  If I was in a house with a family I think it would have been harder to meet people and learn English.  Living at the YMCA has helped me to find friends and learn about the UK.  Meeting people has helped me be calm and happy and feel safe. I wanted to forget the past but it’s my past. It’s part of me. But now I have a better future.”

Since sharing his story Ali has moved into the home of a local family.  Ali had connected with them through attending the church.  After a long process with the Home Office Ali also gained his asylum.  He is settled and thriving in his new home.  He still wants to become a surgeon, is studying hard at college and is in frequent contact with his YMCA friends.  We wish him every success in the future.

Oliver found working with YMCA Positive Placements enabled him to access funding to improve his mobility as well as his work prospects.

Dani's life had been chaotic and unstable. Her YMCA WiSE worker helped to give her a different perspective on life, enabling her to make some wise decisions of her own.

Lihle was struggling to meet the cost of travel to college. Thanks to YMCA funds from Artist Open House 2017, she was able to continue her course until her bursary came through.
Read all our stories