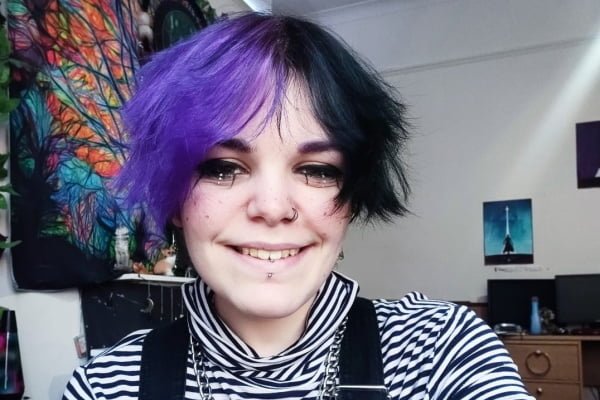 Our Lead Chaplain, Lucy McGrath, shared a TikTok video from one of our residents Nova, a talented singer song writer living in 24 Hour Supported Accommodation in Brighton. We were blown away by their talent and wanted to find out more about what inspired them and understand their story. Read more below and follow them here.

Nova (they/them) left home at 18 but suffered a severe mental health episode and ended up facing homelessness and sofa surfing. Three years ago, they were referred to YMCA DownsLink Group and given a home in 24 hour supported accommodation. Despite difficulties, with support from YMCA DownsLink Group project workers, and ongoing counselling, Nova’s mental health issues have lessened considerably.

We caught up with Nova to ask them more about what life has been like since living with us and what inspires their song writing.

How has YMCA DownsLink Group supported you and what are your hopes for the future?

The support given by YMCA DownsLink Group has been really good. When I first arrived, I had a lot of overdose attempts, was self-harming, and was generally not mentally well. I am feeling a lot better in myself now. I’m now better at noticing when I’m thinking critically about myself versus when I am nurturing myself. I have gotten better with my self-care which was a big problem before. And I haven’t had an overdose in 2 years which is great.

I can see myself moving on in the future, I am on the waiting list for Route 1 (lower support moving on accommodation) and eventually want to get my own place with my partner. Eventually I’d like to work in mental health myself, maybe somewhere like YMCA.

How long have you been making music for?

On and off since I was about 10. I used to have a YouTube channel where I posted covers of songs and then I started writing my own music, and I realised I preferred that.

What does your song This City mean to you?

Its about living in Brighton because it can be two very different places. When you visit Brighton, it’s like a wonderland but when you live here for a long time, you realise that there is a lot going on underneath, like most cities. This song just shows the two sides of it, it’s beautiful, but there’s a lot going on here.

What inspires your music?

It is mostly coming from my own mental health. Writing music feels like getting stuff off my chest, like writing a diary but in music form. I guess the best part of it is being able to play the instruments as well because not only am I letting out my creativity while writing a song but I’m also being able to let my emotions out through the instruments. I feel some relief after I write a song, and more chilled out because I’ve got something off my chest.

How do you come up with lyrics and a title?

The lyrics aren’t too difficult, I just let myself go and mash it all together. The titles are more difficult, I chose This City because I knew it was about Brighton, but I didn’t want to call it Brighton because a lot of cities can be the same and a lot of people can feel the same way about it, even if they’re from somewhere else entirely. Also, it would be a bit savage if I called it Brighton.

Any tips or advice for someone who wants to get into song writing, instruments etc.?

Just go with the flow of it and don’t beat yourself up about it. Allow yourself some space to mess up chords and play around, but also know that you’ll get there and learn things along the way. And it might not sound great to you but then you’ll show someone else, and they might say it’s the best thing they’ve heard. As a musician, you might never like the stuff you write yourself, but other people will. I’ve listened to things and thought oh no this isn’t my jam but then people have said they love it and want it on Spotify. You need to let your critical brain go and let the nurturing side out.

How long does it take to write a song?

It really depends, sometimes it can take 10 minutes if I’m really feeling it and in the mood. But sometimes it can take months, it just depends on what it’s about. I’ve got several songs that are completely unfinished on my computer screaming for me to work on, but I haven’t done anything with them. To get around writer’s block I listen to other music, try to get inspiration from artists I like and play chords I have written down on my guitar or ukulele. I just try to figure out some other lyrics and even if they don’t go with that particular song, I still have another song that I’m working on so they might fit with that instead.

Who is your favourite artist?

One of my favourites at the moment is Sadistik, a rapper who has dark lyrics but is very personal. I like a lot of different types of music, but I’m into rap, particularly quite emotional rap. I like Lil Peep as well. But I also like the complete opposite of that, such as rock. I don’t really have favourite music; it just depends what mood I’m in.

We’re delighted to be able to share Nova’s music with you and we really hope it finds a wider audience. Good luck in whatever comes next Nova!